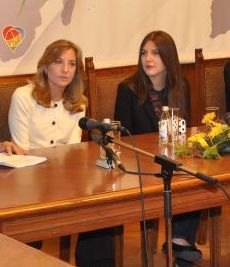 Office for the diaspora has come up with an initiative to name a street after the Oscar-winning actor who was always proud of his Serbian roots.

The initiative to name a Belgrade street after Karl Malden, who died in 2009, came after his daughter, Carla Malden, a Hollywood screenwriter, visited the Office for Cooperation with the Diaspora and Serbs in the Region.

“Malden was a true Serb who always stressed his Serbian origin and he deserves a street in Belgrade,” Aleksandar Vlajkovic, deputy director of the office, who initiated the visit of Carla Malden to Belgrade, said.

Vlajkovic, who knew Malden – born Mladen Sekulovic – said he wanted to repay a debt to the movie star who was born in Chicago in 1912 to a Serbian father and a Czech mother.

After appearing as an actor on Broadway in 1937, he changed his name to Karl Malden at the age of 22, when he was asked to shorten his name.

In 1972, Malden starred as Lt. Mike Stone in The Streets of San Francisco, while in 1987 he was the host/narrator for the long-running series, Unsolved Mysteries.

He won the 1951 Academy Award for Best Supporting Actor for A Streetcar Named Desire and was nominated in 1954 for his supporting role in On the Waterfront.

In 1997, Malden published his autobiography, When Do I Start?, co-written with his daughter, Carla.

His friend and former co-star Michael Douglas wrote a tribute to Malden for Time magazine’s “Milestones” section in which he revealed that he first met Malden in the office of the producer of The Streets of San Francisco.

“He had the most piercing blue eyes, and you always had a sense of where you stood with him by looking into them,” he said.

Carla Malden said in Belgrade that her father did not work only to get awards and acknowledgement.

“My father was proud to be a Serb,” she said. “He made hundreds of movies, won an Oscar, Marlon Brando learned from him, but he never expected to get an award. That’s why now he would be surprised, and maybe even humbled.”

Share
Previous Serbian for Beginners
Next Questionnaire for Serbian Schools

Through the Pay Pal account over 690 000 euros collected for flood relief. Ministry of Finance data concerning balance of dinar and foreign currency accounts for floodrelief are updated on the web site on daily basis.