Decisive breakthrough of World War I 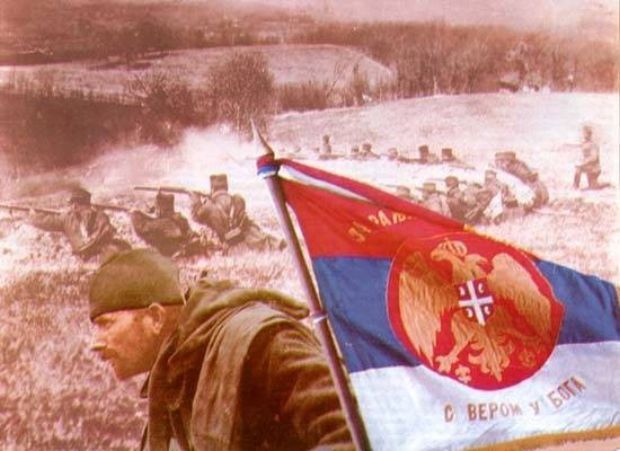 During the unstoppable breakthrough that ultimately led to the end of the World War I, the Serbian army passed 600 kilometers in 45 days. French general Louis Franchet d’Esperey wrote that even the French cavalry was barely catching up.

In autumn 1918 the Macedonian front (Salonika front) breakthrough started. The Allies couldn’t even assume that this secondary and less important front would soon gain such significance and that 62,000 soldiers from a country that many believed didn’t exist anymore would decide the outcome of World War I.

Never before, in the entire war history, has almost the entire population of a country with its king, government, ministers and army, left their homeland and relocated to another. Serbia did exactly that in World War I. Surrounded by enemies, Serbia retreated across Albania to Greece where all the people took refuge on the island of Corfu.

In April 1916, the recovered army was transferred to Thessaloniki and joined the French and the British troops. Soldiers were then sent to the battlefield and a front that was stable and secondary in comparison to the fronts in the West. Until September the 14th 1918 and the great offensive.

Many historians wrote of the great desire that World War I Serbian soldiers had to return to their homeland. They dreamed of it and sang songs about it. Songs remembered even by the Allied soldiers.

Once the breakthrough began, the Serbian army couldn’t be stopped. French military reports noted that Serbian troops marched 17 hours a day. Even the cavalry had difficulties catching up, while the enemy Bulgarian soldiers fled in retreat leaving their weapons behind.

On September the 29th Bulgaria surrendered. It was a great victory for the Allied forces – 700,000 enemy soldiers withdrew from the war and Germany gave order to retreat. According to the words of German Emperor Wilhelm II, Serbian troops with around 62,000 soldiers delivered the final verdict.

In the end, the Serbian army passed around 600 kilometers in 45 days, fighting the enemy and liberating their homeland. On November the 1st Belgrade was free again, and on November the 10th the French troops crossed the Danube and started their advance through Hungary. World War I was finally ended.

After the Macedonian front breakthrough and defeats on all other battlefields, Germany requested truce. The fighting in World War I ended on November the 11th, 1918. The “Manchester Guardian” wrote: “Despite the immense role of France in the victory, today the world is thinking of Serbia”.

In World War I Serbia lost 26% of its population, more than any other country involved.

This is how General d’Esperey remembered the Macedonian front breakthrough: “They are almost all peasants, they are Serbs, strong when torments strike, sober-minded, modest, they are free, unbreakable, proud lords of their fields. But then the war came. And for the freedom of their homeland these peasants transformed easily into soldiers, the bravest, the most persistent, and the best of all. Those are great troops and I’m proud of having led them, side by side with the French army, all the way to the liberation of their fatherland….”