Defending Belgrade until the dying breath 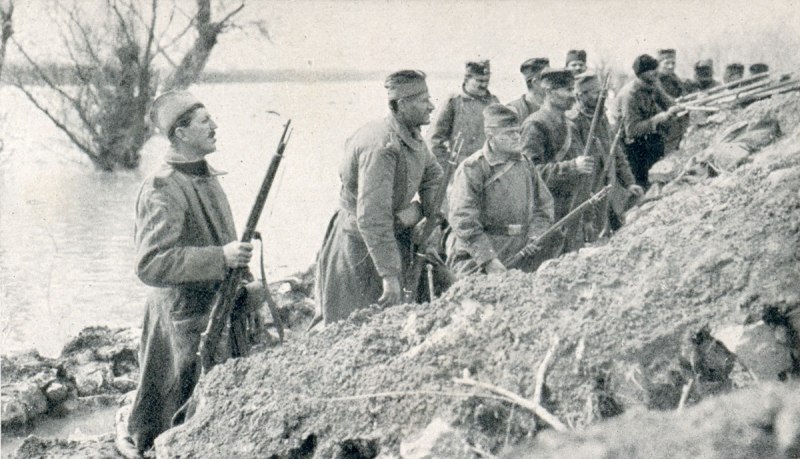 Austro-Hungarian and German armies had been ruthlessly bombarding Belgrade for over a year, but all of their attempts to cross the rivers Sava and Danube were contested for three full days by the heroic Serbian army units. The city ultimately fell, but the ferocious resistance of its defenders earned it the distinction of being one of the five cities awarded with the Legion of Honor.

During the first year of the Great War, Belgrade was bombarded from across the Sava and Danube rivers with countless shells. The city was annihilated, casualties were immense, while the survivors hid in shelters or fled abroad. Many had wholeheartedly helped the army. The city resisted the attacks despite the great efforts of the enemy to cross the Belgrade rivers and conquer the Serbian capital.

In September of 1915, the enemy started to intensify its attacks which culminated on the 5th of October. Belgrade was bombarded throughout the day and night. According to some estimates, 30,000 shells were fired on Belgrade that day. Even that didn’t stop the valiant defenders from protecting their city until their last, dying breath.

The first line of defense consisted of the members of the 10th and 7th Regiment, and the remnants of the Srem and Gendarmerie Regiments. They had only one objective: to fight for Belgrade until death!

Belgrade’s defenders achieved this objective and forever engraved their names in the Serbian history books. Among all the brave soldiers, the ones that were most talked about were the Danube quay heroes, who were nearly all killed during the three days of defending the Belgrade. The White City turned to crimson.

On the day of the decisive battle, they received the Communion in the Ružica church (Little Rose church) in the Kalemegdan Fortress, and then they scattered around Dorćol and the Danube quay, readily waiting for the enemy. They sang to chase away the fear of certain death to which they were led by the speech of their commanding officer Major Gavrilović, who wanted to inspire them and lift their spirits before the upcoming battle.

“Soldiers, exactly at three o’clock, the enemy is to be crushed by your fierce charge, destroyed by your grenades and bayonets. The honor of Belgrade, our capital, must not be stained.

Soldiers! Heroes! The supreme command has erased our regiment from its records. Our regiment has been sacrificed for the honor of Belgrade and the motherland. Therefore, you no longer need to worry about your lives: they no longer exist. So, forward to glory! For King and country! Long live the King, Long live Belgrade!”

Church Ružica, in which the defenders of Belgrade received their last communion, is listed as one of the most unusual churches in the world. The main reason why, among many others, lies in its horos, made of firearm parts, gun and bayonet bullets used in the Great War as well as Serbian officers’ sabers of that time.

German and Austro-Hungarian troops started crossing the Danube on the 7th October. Defenders met them on the Danube quay with strong infantry and artillery fire. Alongside the soldiers, civilians, women, children and elders also participated in the defense.

Almost all members of major Gavrilović’s regiment were killed, whereas he himself was gravely wounded. The enemies were more powerful and prevailed quickly, pushing the defenders across Ada Ciganlija and Banovobrdo, who were retreating towards Zvezdara, while the defenders of the Danube quay were pushed out to Dušanova and Vasinastreet, and then to Avala, which was also conquered in the end. In that moment Bulgaria attacked Serbia, so Moravian Division was transferred to Belgrade on that front. The enemy was more powerful and larger in numbers, and despite the heroic efforts of its defenders, Belgrade had fallen, and soon the Austro-Hungarian and German flags were raised on and on the Stari Dvor’spalace in the Knez Milan street.

The graves of “the fairy tale army”

When the Dorćol’s underpass was being built in the 1934 in Tadeuša Košćuška street (which leads to the Danube quay), the remains of defenders who had given their lives for the city two decates earlier were accidentally discovered. The first to be exhumed were 25 skeletons from Gavrilović’s regiment, and then 28 more. The remains of Belgrade’s valiant heroes were buried in the Memorial Ossuary in military graveyards, in the Alley of National Heroes located on the Novo groblje in Belgrade. Many defenders of Belgrade found their resting place in an ossuary located in the wall underneath the Jakšić’s tower on Kalemegdan.

General Mackensen, who was a commander of the enemy troops, had written in his memoirs about the Serbian soldiers who were defending the Belgrade in October,: “We fought against an army that we have heard about only in fairy tales, who defended themselves with virtually unprecedented courage. The moment we conquered Serbia hurt us more than her allies.”

For the outstanding bravery of its defenders, marshal Franchet d’Espèrey awarded the Legion of Honor to the Serbian capital, an accolade bestowed to only five cities in the whole, only two of those cities not being French.

The memorial to Belgrade’s defenders engraved with the words of Major Gavrilović’s speechwas erected on the Danube quay in 1988. The exact spot where the major held this famous speech on the 7th of October 1915, on the corner of Cara Uroša and Mike Alasa street in Belgrade, a memorial plaque was placed in 1995. It was subsequently destroyed, but was rebuilt on October the 7th 2013.