The most difficult ultimatum ever given to a country

Instead of the smell of summer, the warm July of 1914 brought the citizens of the Kingdom of Serbia the smell of gunpowder – the war that started the avalanche of the accumulated European, as well as the global, discontent that soon engulfed almost the entire world. A month after the Sarajevo Assassination Austro-Hungarian Monarchy gave the Serbian Government an ultimatum which the British Foreign Secretary Sir Edward Grey characterized as “the most difficult one ever given to one country by another”. 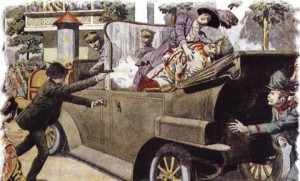 The Sarajevo Assassination , when Franz Ferdinand, heir presumptive to the Austro-Hungarian throne, was killed, was the trigger for the outbreak of the war between the Kingdom of Serbia and the Austro-Hungarian Monarchy, which considered Serbia responsible for the assassination. However the reasons were of a much deeper nature.

Fearing the growing role of Serbia on the Balkans, Austro-Hungary helped Serbia at the Congress of Berlin in 1878 (on which it was given the permission to occupy Bosnia and Herzegovina over the course of thirty years) gain independence. Serbia in turn promised to the Austro-Hungary the Sanjak of Novi Pazar, by means of which the monarchy succeeded in thwarting the plans for Serbia and Montenegro merge, and prevented the breach of Serbia to the East. Additionally certain trading agreements were signed that prevented Serbia from making agreements with any other country without the approval of the Monarchy.

The collapse of The Obrenović dynasty (the Assassination of the King Alexander and the Queen Draga) and the return of The Karađorđević to the throne signified a change to the foreign policy orientation, because the country turned to Russia. Even The Customs War by which the Austria-Hungary tried to weaken the Serbian economy failed, because Serbia, contrary to the expectations, grew stronger along with the Pan-Slavic idea of the unification that specially frightened the Austro-Hungarian Monarchy, so the animosity towards Serbia increased.

In the occupied Bosnia, as was the case in Serbia, national-revolutionary organizations begun to sprout, open for all means of combat, especially the assassination which were, at the time, a common occurrence in the world. That is how the organization “The Young Bosnia” came to be, the organizer of the Sarajevo Assassination, which operated thanks to the support of the two Serbian organizations “Narodna Odbrana” (the People’s Defense) and “the Black Hand”.

Nearly a month after the assassination the Austro-Hungarian minister at Belgrade, the Baron Giesl von Gieslingen, presented the ultimatum to Lazar Paču, the Acting Minister for Foreign Affairs of Serbia, which directly transferred the blame for the assassination to Serbia and issued the Government some highly arrogant demands which if met would make the Kingdom of Serbia’s sovereignty meaningless.

With the ultimatum from the 23rd of July 1914 the Austria-Hungary demanded the following from Serbia:

1. To suppress any publication which incites to hatred and contempt of the Austro-Hungary

2. To dissolve immediately the society Narodna Odbrana, and to proceed in the same manner against other societies which engage in propaganda against the Austro-Hungary.

3. To eliminate from public instruction in Serbia everything that serves, or might serve, to encourage the propaganda against Austria-Hungary

4. To remove from the military service, and from the administration in general, all officers and functionaries guilty of propaganda against the Austro-Hungary whose names the Austro-Hungarian Government will provide

5. To accept the collaboration in Serbia of representatives of the Austro-Hungarian Government for the suppression of the subversive movement directed against the territorial integrity of the Monarchy

6. To take judicial proceedings against accomplice to the Sarajevo Assassination who are on Serbian territory, with the help and instructions of the delegates of the Austro-Hungarian Government

7. To proceed without delay to the arrest of the two named people who have been compromised by the results of the magisterial inquiry by the Austro-Hungary

8. To prevent by effective measures the cooperation of the Serbian authorities in the illicit traffic in arms and explosives across the frontier

9. To furnish the Austria-Hungary with explanations regarding the utterances of high Serbian officials, both in Serbia and abroad, who expressed their hostility to the Austro-Hungary

10. To notify the Imperial and Royal Government without delay of the execution of these measures

The most disputed demand of the Monarchy, the demand number 6, meant that Serbia would disregard their own law regarding court proceedings in criminal act by letting the Austro-Hungarian authorities “suppress the subversive movement directed against the territorial integrity of the Austro-Hungarian Monarchy”. The reply from the Serbian Government soon followed, and the people were already feeling the danger from the North. The Monarchy wished for the war.