Poor sanitation and living conditions in Serbia during the Great War did not prevent many Serbian doctors to become pioneers in various fields of medicine. Dr. Vojislav Subotić (1859 – 1923) should certainly be included in this group. Living in a historically volatile time, he had the opportunity to participate in five successive wars. 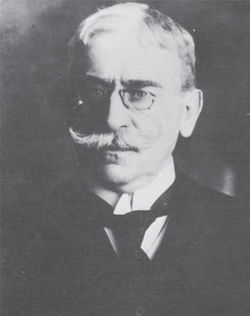 In World War I, despite poor health, Dr. Subotić took over different roles and responsibilities. At the beginning of the war, he was the Head of the Military Hospital in Niš and a medical colonel; then, along with the army, he went through the Salonika front, followed by a short period of time spent in London and Paris, and have since returned to manage the Surgical Hospital in Dragomanci.

When the war began, Dr. Subotić left the position of Head of the Surgical Department of the General State Hospital in Vračar, and was transferred to the Military Hospital in Niš, where he became a reserve medical colonel. After enemy’s advancement, not wanting to fall into slavery, he evacuated via Albania along with the Serbian army. During this period, Dr. Subotić suffered from stenocardiac attacks and poor health followed him for the rest of his life. Decrepit, weakened and without his surgical department, Dr. Subotić spent a short time in Paris and London, where he worked as a Serbian delegate from 1916. to 1918. During this period in London, he gave a lecture about an epidemic of typhus that raged in Serbia in the period from 1914 to 1915. In 1916. he constructed a brace to immobilize the femoral bone and showcased this invention at the Paris Academy of Medicine; because of this, Paris Surgical Society selected him for its member in 1916.

At the beginning of 1918. Dr. Subotić came to Corfu with intention to make contribution in the war, for the Serbian cause. In Salonika, he was offered to work in a surgical ward at the hospital of Crown Prince Aleksandar. However, Dr. Subotić did not want to accept a peaceful and safe job, but instead chose to work in the 2nd Army that was commanded by the legendary Field Marshal Stepa Stepanović.

Military Hospital on the Salonika front in Dragomanci, near Bitola, was established as the first field hospital, and is known for the fact that the distinguished Serbian surgeons worked in it, such as Dr. Subotić and his students: Dr. M. Petrović, Dr. L. Koen, and Dr. N. Krstić.

Makeshift hospital in Dragomanci consisted of buildings erected in four lines and included three operating rooms, two dressing-stations, x-ray department, bacteriological and serological laboratory, and pharmacy. Smaller buildings with eight beds were used for the seriously wounded and were constructed in the vicinity of the operating room.

Though torn by a terrible pain in the chest, Dr. Subotić has worked tirelessly and approached his surgical task with great love. When he arrived at the front he asked to visit the trenches in which the Serbian soldiers lived without rest and replacement from 1916. until the breakthrough. Admiring their heroism and endurance he said: “Our people are so modest in their heroism that we even do not have enough ways or enough power to make more services for them”.

After the end of the Great War, in the year of 1919, Dr. Subotić was elected full-time professor at the freshly opened Medical Faculty in Belgrade, and two years later he was elected Dean. During this period, despite the very poor state of health, Dr. Subotić founded the first surgical clinic and became its first director.

Generously using his surgical skills, Dr. Vojislav Subotić was very active during the war period, starting from the Serbo-Turkish War until World War I. For a short time he established himself as a very respected war surgeon, for his contribution to science and research, and was named a member of the Association of War Surgeons of the United States and the Association of War Surgeons of England.