Natalie’s Ramonda, a Symbol of Armistice Day in Great War

Serbia’s qualities such as endurance, courage and ability to rise under difficult circumstances and in harsh times – when Serbia seems lifeless and forgotten, are reflected in an amazing flower called Natalie’s Ramonda. Bearing the name of Queen Natalija Obrenović, this plant with rare curing powers and unusual habitats where it grows, became the main motif for the Armistice Day emblem in World War I.

In a rail carriage at Compiègne on November 11, 1918, the Allied powers and Germany signed the ceasefire and thus ended the Great War. Almost 95 years after this historically important event for the entire world, the Republic of Serbia celebrates “Armistice Day in World War I” as a national holiday starting from November 11, 2012. By celebrating this date, tribute is paid to all the soldiers of the Kingdom of Serbia who fought bravely, and to all the innocent victims of the 1914 -1918 period.

During these four years, the Kingdom of Serbia had to make tough decisions, withstand a great loss and suffering, and resist many temptations. From the magnificent victories at Cer and Kolubara, to the Albanian Golgotha and Salonika front breakthrough, the Serbian government eventually found itself on the side of the winners and managed to rise like a phoenix from the ashes that the Great War left behind.

This magical ability of resurrectionrepresents the main link between the Serbian state and Natalie’s Ramonda. No one can stay indifferent beforethe beauty of the flower’s purple leaves and its ability to return to life with a few drops of water. In addition, this miraculous flower grows on Kajmakčalan, which was the scene of the famous battle in the Great War, so everything indicates that this flower rightfully deserves being a symbol of revival of the Serbian state and its place on the emblem of Armistice Day.

Natalie’s Ramonda (Ramonda nathaliae) was discovered by Doctor Sava Petrović in the vicinity of Niš, and Josif Pančić described it in 1884. Growing in Serbia, Macedonia and Greece, this flower is an endemic species of the Western Balkans. It is on the list of rare, threatened and endemic plants of Europe, and it is strictly protected species in Serbia. Natalie’s Ramonda has predominantly round dark purple leaves and can grow up to 2 meters.

The badge that is worn since 2012, a week before the holiday and on the very day of the holiday, represents a combination of the Natalie’s Ramonda flower and the famous Albanian Retreat medal. This flower is are surrection symbol of the Serbian state that rose after World War I and resumed its progress,whereas the Albanian Retreat medal represents the unprecedented suffering of the Serbian people in this war (usually described as the Albania’s golgotha). 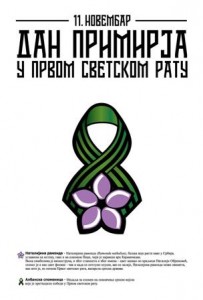 Before it was proclaimed a national holiday, Armistice Day was celebrated since 2005. at the start of lectures in the elementary and secondary schools. Since 2012. when it became the official holiday, the badge with the emblem of Natalie’s Ramonda and Albanian Retreat medal is worn by the government officials, media personalities, as well as the citizens of Serbia. This day is designatedas a non-working day.

Besides Natalie’s Ramonda, there is also a flower called Ramonda serbica. Although they belong to the same family, these two flowersdiffer mainly in the shape and color of leaves, and in durability too. Ramonda serbica has predominantly rhombic light purple leaves, and Ramonda Nathalie has mostly round dark purple leaves. The only place in the world where these two Ramondas grow next to each other is the vicinity of Niš.

Share
Previous The Battle of Cer: The First Allied Victory in the Great War
Next Hardened field marshal honours the defenders of Belgrade