Nikola Pašić, politician for half a century 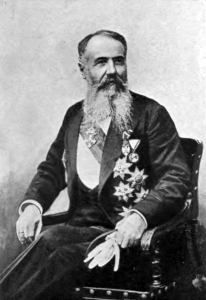 From the legislator to the founder of the People’s Radical Party and all the way from being proclaimed as the conspirator during the reign of Obrenović dynasty to the most influential politician during the reign of Karađorđevićs. Serbian Prime Minister in two Balkan wars and WWI, banished and sentenced to death, then pardoned and appreciated. That is the story of Nikola Pašić. There are many opinions regarding his political life, but one thing that everybody agrees upon is that he was one of the most influential politicians and diplomats who has left the indelible mark on the Serbia’s political scene in the 19th and 20th century.

In the city of Niš, on the 28th of July, 1914 at 1 PM, the Prime Minister of Kingdom of Serbia – Nikola Pašić, received a letter whose content will make the whole world tremble during the next four years. Austria-Hungary declared a war to Serbia. That same night, the Austro-Hungarian army started the bombardment of Belgrade which continued for the next 6 days and nights. The WWI had started. This declaration of war which will completely change the way the Europe of that time looked like and in which the millions of people will lose their lives while many more will remain injured, was preceded by the assassination of Franz Ferdinand and his spouse Sophie in Sarajevo. Since the Serbian government couldn’t comply with only one out of many rigorous points of the Vienna’s ultimatum, Austro-Hungary decided to sever the diplomatic relations with Serbia. Tumultuous life of the politician, statesman and diplomat once again put Pašic in difficult position. In his hands he held a document that would change the fates of more than 70 million people. According to the unofficial sources, having read the telegram, Nikola Pašić uttered the sentence which was written by a poet who happened to be there: “Austria has declared a war on us. That will be the end of her. God will grant us victory”. The key position as the Prime Minister, Nikola Pašić retained throughout the Great War. Even though he was known as a “taciturn politician” he succeeded in maintaining this position with minor intermissions until the day of his death in 1926. After the Serbian army’s initial failures, he retreated to Niš with the whole government, where on the December the 7th in 1914 the Kingdom of Serbia first proclaimed its war aims by issuing the Niš Declaration, in which was outlined the idea of uniting Serbs, Croats and Slovenes. This idea resulted in the creation of the Kingdom of Serbs, Croats and Slovenes on the December the 1st in 1918, and three years later the Vidovdan Constitution was passed, whose creator was, among others, Nikola Pašić.

He started to show his fighting spirit and acuity while he was just a legislator in 1878. Just three years after the commencement of his political career, he founded the first modern Serbian party – the People’s Radical Party. Because he strongly opposed against the Obrenovićs’ reign, he started the Timok Rebellion in 1883 together with his party members, which resulted in declaration of the state of emergency and condemnation of a 100 of rebellion’s participants to death, whereas over 500 of them were sentenced to the long-term imprisonment. In order to avoid the death penalty, Pašić had escaped to Bulgaria where he remained in exile for the next six years.

“As a politician he was agile, able to assess the current circumstances, avoid the temptations and attacks, he was lenient where he needed to be and firm and rigid when it suited his interests. He always knew to avoid those who were stronger than him”. These were the words of the famous historian Milan Protić with which he described the great Nikola Pašić.

After Milan Obrenović abdication, Pašić returns to Serbia, assumes the leadership of the People’s Radical Party and after winning the elections, he forms his first government cabinet in 1891. In the next few years he was the Prime Minister, the Minister of Foreign Affairs, a diplomat and he represented the Serbian government in St. Petersburg. After the failed Ivandan’s assassination attempt on king Milan and the prison sentence he yet again succeeded to avoid, with the Karađorđevićs’ coming to power, he returns to the political scene in 1901. He played an important role for Serbia in the Customs War (Pig War) with Austro-Hungary (1906-1911), when he managed to avoid the customs blockade imposed by the great neighboring empire. When it comes to his political strategy, he relied a lot on Russia, and after the French Revolution, on France. He was wise, pragmatic, extremely informed, composed and dedicated politician. Apart from the Prime Minister function he performed for over 20 years, Pasic was five times the President of the National Assembly, and twice the mayor of Belgrade. He was also the president of the Serbian delegation on the Bucharest Peace Conference in 1913, and the president of the Kingdom of Serbs, Croats and Slovenes ’ delegation on Paris Peace Conference in 1919. With his ingenuity, lenience, great negotiation skills and statesman abilities, Nikola Pašić affected the half-century long political strategy of the Serbian state between two eras, three wars, between the fall of one and the creation of totally different Europe.

Pašić was born on the 18th of December, 1845, in Zaječar, in a family of bakers. He attended the Zaječar’s Gymnasium during its constant relocations, so for his education he spent his time in Negotin and Kragujevac as well. He graduated when he was 21, mostly with good GPA. In 1866 he enrolled in the Belgrade Higher School and Serbian government awarded him with a scholarship in 1868 and had sent him to Zurich where he continued his education at the Polytechical School. Even though he was an engineer, he spent the least amount of his time working as one.