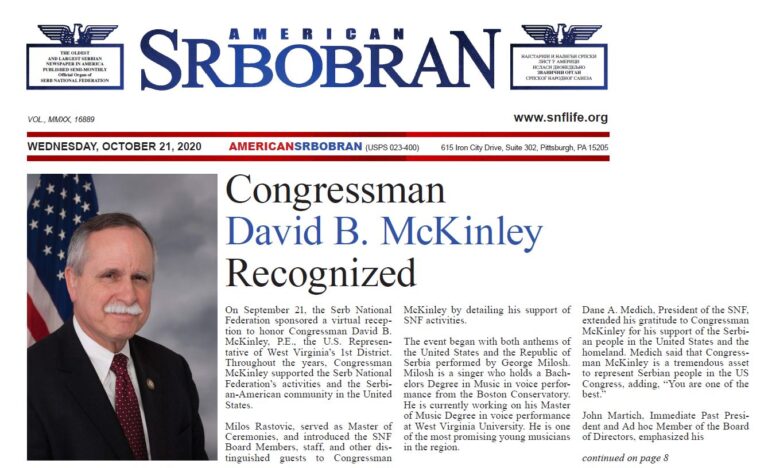 Milos Rastovic, served as Master of Ceremonies, and introduced the SNF Board Members, staff, and other dis­tinguished guests to Congressman McKinley by detailing his support of SNF activities. Rastovic cited the recognition bestowed on Congressman McKinley is for “his continuous effort to help the Serbian cause, positive impact on the reputation of Serbs in the United States, and pro­moting the relationship between Serbia and the United States.”

Congressman McKinley thanked the Serb National Federation for his recog­nition, and for the opportunity to work with the SNF in its efforts to preserve Serbian heritage, tradition, and culture. He said that he missed the Serbian pic­nic in Weirton, WV, for the first time this year because of the COVID-19 pan­demic: “The Serbian picnic reinforces the relationship and getting to know the people.”

He proudly displayed the book The Serb Na­tional Federation First 100 Years during the Reception: “That was the day when I met the Serbian Prime Minis­ter…I am particularly honored that you include me as a part of your networking, friendship, and culture. We were able to do different events throughout the years. I love Serbian music and culture. The most important thing is your fellowship.