The Serbia-Germany Forum association has been founded in Belgrade with the goal of improving economic and political cooperation between the two countries. Serbian First Deputy Prime Minister Aleksandar Vučić is an honorary member of the Forum. Relations between Serbia and Germany are important for the continued development of Europe, said Gerhard Schröder, the honorary guest of the Forum.

Aleksandar Vučić, the First Deputy Prime Minister and honorary member of the Serbia-Germany Forum, met with Gerhard Schröder, the Forum’s guest, immediately before the official reception in the Forum’s premises.

Aleksandar Vučić said that the road ahead of Serbia is a difficult one, but it has a secure future, because everything is in its hands and added that Serbia is not afraid to be a friend of Germany.
“Serbia will not be afraid to be a friend of Germany, and this means fulfilling its difficult foreign and internal obligations, as well as difficult reforms and curing itself of socialist self-governance in order to create a modern country with a market economy. We will not make any compromises here,” said Vučić at the official ceremony to mark the opening of the Serbia-Germany Forum.
Serbia faces a difficult path, but the country has a secure future and everything is in our hands and it all depends on our work, willingness and diligence, underscored Vučić, who believes that if we act responsibly and seriously we will also have the support of Gerhard Schröder, in attendance at meeting, of Germany, of Chancellor Angela Merkel and of the German people, reported Tanjug.

Schröder is currently Chairman of the Shareholder’s Committee of Nord Stream AG, which owns the North Stream pipeline. He has been active in the Rothschild Group since 2006 as a business advisor for Eastern Europe, Russia, China and Turkey. He recently warned openly of the risks that lie in isolating Russian President Vladimir Putin over the crisis in Ukraine. He linked his stand on Russia and the Crimean crisis with the bombing of the Federal Republic of Yugoslavia in 1999: “We sent our planes to Serbia and together with NATO bombed a sovereign country, without a U.N. Security Council resolution. That is why I am hesitant when it comes to pointing fingers at anyone”. [/blockquote_left]

Schröder said he was pleased that he had the chance to attend the official ceremony to mark the start of the work of the Forum, because, as he underscored, he strongly cares about improving ties between Serbia and Germany, given that they are important for the further development of Europe.
Nothing is so good that it can’t be improved. That’s why I hope that the ties between the two countries will become even more intense through this Forum, said Schröder. “Serbia is the key country in the Balkans for Germany. The current Serbian Government essentially repaired ties with all countries in the region, especially with Croatia and Bosnia and Herzegovina, which Aleksandar Vučić can take credit for, as he was involved authoritatively in the policy of the previous government,” said Schröder.

The Forum is registered as an association that gathers individuals, organisations and institutions from Serbia and Germany with a view to developing and improving relations between Serbia and Germany in politics, the economy, culture, education and science.

Marko Čadež became the Director of the Forum on April 1 this year and is also the director of the representative office of the Serbian Chamber of Commerce in Frankfurt. Marko Čadež went to Frankfurt after working as the spokesperson of the German Embassy in Belgrade.

The honorary members of the Forum are German Ambassador Heinz Wilhelm, Serbian First Deputy Prime Minister Aleksandar Vučić, president of the Southeast Europe Association and member of the Socialist Party of Germany Gernot Erler, Ružica Đinđić and Philipp Missfelder who is a member of the Bundestag and the foreign policy spokesperson of the CDU/CSU parliamentary group.

Representatives of the Serbia diaspora in Germany, including Prof. Dejan Ilić, PhD, as well as Dr Slavka Drašković, the director of the Office for the Diaspora and Serbs in the Region, and Aleksandar Vlajković, the deputy director of that office. 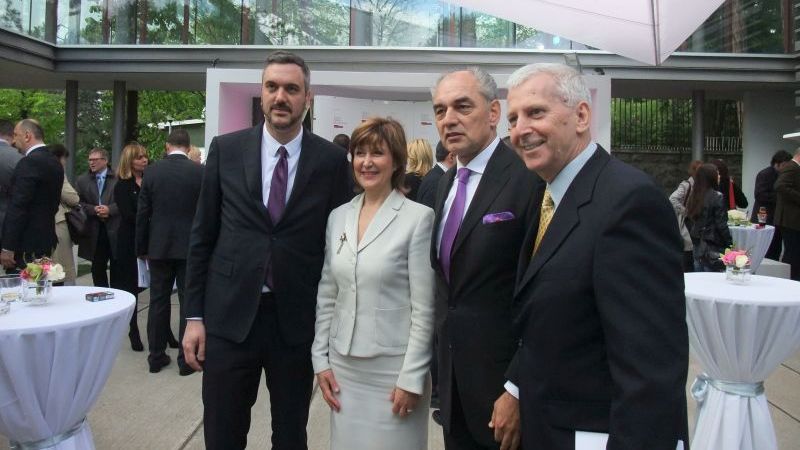