Home >>> News >>> Slavka Draskovic on the diaspora, with ambassador Wilhelm

Slavka Draskovic on the diaspora, with ambassador Wilhelm

Director of the Serbian Government’s  Office for the Diaspora, Dr Slavka Draskovic, talked to the Ambassador of Germany, Heinz Wilhelm, about Office activities, investments and diaspora events in the Federal Republic of Germany. 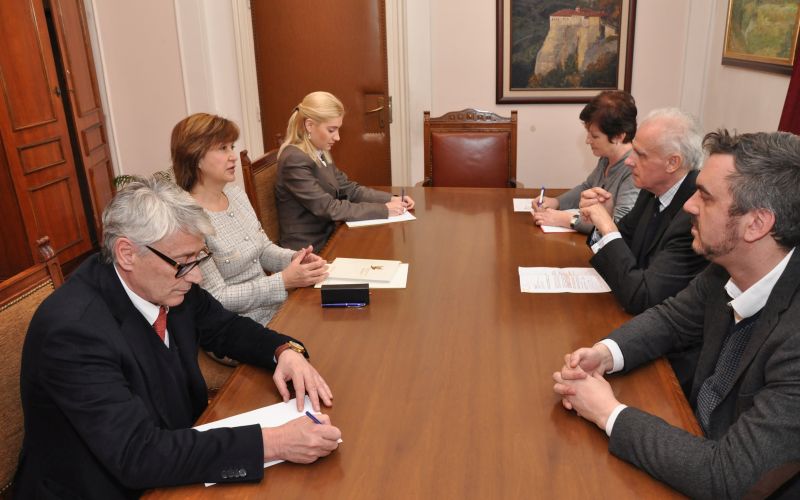 The meeting at the Office for the Diaspora was also attended by Inge Erler, Head of the Culture Department and Marko Čadež, Press and Public Relations Counselor and Embassy spokesman, as well as Assistant Director of the Office, Vukman Krivokuća and Independent Advisor, Milica Vučković.

The director announced that the Office is planning to organise an event involving Serbia and Germany – The Serbian Diaspora and Serbian-German relations in the XXI century, in October this year in Berlin. ‘This conference has, among other ambitions, the aim of strengthening connections between Serbia and Germany, as well as with members of our diaspora there. We also hope to reinforce the Serbian diaspora’s motivation for self-organisation in Germany. Representatives from the authorities in both countries, as well as members of the Serbian diaspora, will participate’, said Dr Slavka Draskovic.

She pointed out the important role the diaspora plays in the economic development of Serbia, and that the diaspora is naturally oriented towards its local origins and the places where relatives still live. ‘We have an example of a successful project in ‘Employ Serbia’, which was launched by the Office in cooperation with local town councils in Serbia. Its aim was to connect the diaspora and potential investors abroad with local town councils, and thus launch investments for small and medium sized enterprises in Serbia. By these means, some investments have already been realised, such as the building of a pellet plant in Brus, which uses German technology’, said Dr Slavka Draskovic.

Ambassador Wilhelm also expressed an interest in the reasons behind the diaspora’s poor response to Serbian elections, and stressed that Serbs in Germany should be better organized. The Ambassador announced the establishment of the German- Serbian forum, which should contribute to the promotion of cooperation between the two countries, and invited the director to attend its opening ceremony.

The Embassy Spokesman, Marko Čadež, said that the German-Serbian forum is a Serbian-registered association, and that its work will involve citizens and experts from Serbia, Germany and members of the diaspora. This forum will participate on themes such as economics, politics and all other areas of cooperation regarding projects, as well as through support for institutions.