During World War I seemingly ordinary people demonstrated ability to perform heroic deeds. A special place among them is reserved for Vuka Popadić, the bravest citizen of Belgrade who will be remembered for her heroism and nobility. During the first days of the war Vuka Popadić captured fifteen Austrian soldiers whom she offered water and slatko (a type of Serbian sweet made of fruit), and then she founded a bandage-station where she saved hundreds of Serbian soldiers. 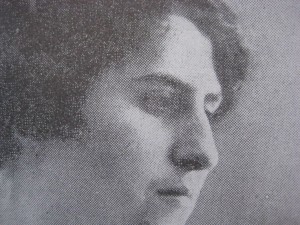 During the first year of World War I, a large number of shells fell on Belgrade, especially in the area of today’s Dorćol and Savamala. These areas have been completely devastated, and people sought refuge in basements and shelters. In these difficult days, in Dušanova Street, in residential building No 4, lived Vuka Jovanović, who later married to Živko Popadić, a Treasurer of Trams and Light Department.

In the most difficult days of the war Vuka Popadić offered refuge to women and children from Dorćol who abandoned their homes due to frequent bomb attacks. This woman, who was not driven away by bombs, made a sanctuary of her home in Dušanova Street, where she comforted and revitalized whole families and thus provided them with immeasurable support. She was assisted by her sister Lela and eleven year old daughter Jelena. With courage and aptness, Vuka Popadić impressed and eternally indebted her fellow citizens as well as soldiers and officers who were stationed at Dorćol.

This unbreakable woman demonstrated her heroism during two sucessive Austrian attempts to caputre Belgrade. After the first conquest of Belgrade, Vuka Popadić surrounded herself with poor and frightened citizens, and told them that Belgrade will not be occupied for too long. Indeed, after several days, the enemy has started to retreat.

According to tradition, Vuka came out of her apartment to see if the enemy army is still in the small town, and at the corner of Dušanova Street she ran into a group of Austro-Hungarian soldiers who were trying to find shelter from the Serbian army’s machine-gun and cannonfire. With stern voice, Mrs. Popadić called soldiers to discard their weapons and follow her in order not to lose their lives in vain. After she sheltered the startled Austrians in her home, she served slatko and water to her prisoners. 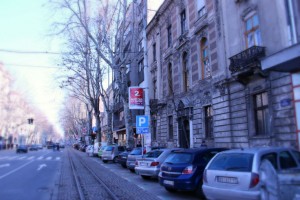 When the Serbian army retook the town and set up the headquarters in Dušanova Street, Vuka Popadić took her 15 prisoners and handed them to Serbian army. The commander of the army congratulated her on this ”exceptional mastering” of the enemy, while on the other side, the Austrians were also grateful that she saved their lives.

A year later, in 1915, over 4000 shells from the Austro-Hungarian and German heavy guns fell on Belgrade, while heavy fighting to the last breath to defend the capital was raging on the Danube quay and in Dorćol area.

In this difficult year, Vuka Popadić once again proved that she was the bravest Belgrader in World War I by saving over a hundred of Serbian soldiers. With the help of her sister Lela and daughter Jelena, Mrs. Popadić opened a temporary bandage-station in Princa Evgenija Street.

In the bandage-station, which was installed in the center of the battle, Vuka Popadić bandaged and invigorated over a hundred seriously wounded soldiers, and helped them to come to the hospital. This fearless woman saved lives of many combatants, and thanks to her generosity she became a member of the Belgrade’s Defenders Society together with her sister Lela and daughter Jelena.

Share
Previous Living in Belgrade in the Early Days of the Great War
Next Dr. Vojislav Subotić, a Patriot With a Scalpel